Half a World Away 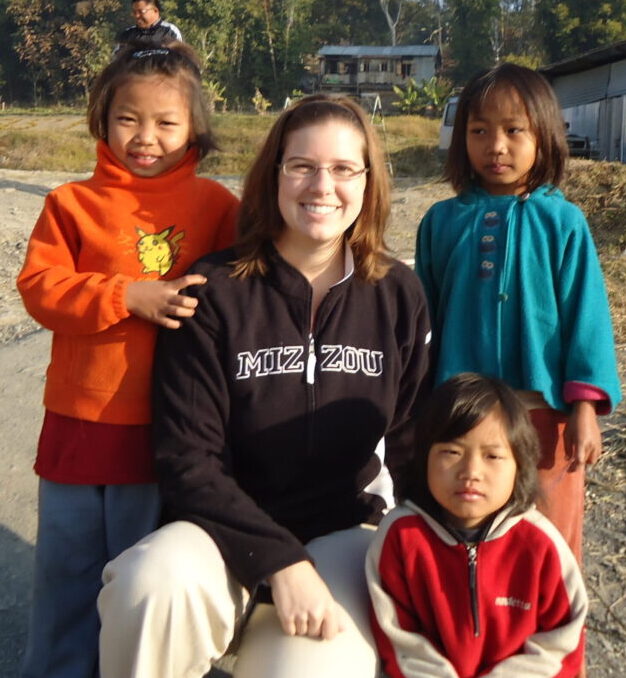 Jenifer with some of the children.

We are delighted to feature this beautiful story written by Jenifer Segal about her experience as a sponsor. Jenifer is married and mother of two children living in St. Louis. She is National Editor of Major League Baseball communications and is thrilled to share her inspirational story with the James Connection community...

I was blessed with an opportunity to travel to Manipur, India, in January 2011, along with Jan Swensen and Stephanie (Robison) Cooper to see the work being done at Angels Place and to help construct a new library on campus.

It was not my first mission trip, but it certainly was among the most impactful. Spending a week reading and playing, singing and laughing with the children renewed my spirit and left the sort of impression that is not easily erased. Upon saying goodbye, I felt certain that I would forever be attached to those children.

My life has changed so much since then. I moved away from Pittsburgh and settled in St. Louis, where I now live with my husband and our two young children. Yet one constant through all these seasons of life has been my connection to Angels Place.

Deciding to become a sponsor – and to recruit others to do the same – was an obvious next step upon returning home from India. I had just seen firsthand the needs of these children and the way that Angels Place helped fill the gap for orphans in that community. I was also blown away to learn how much could be achieved from a seemingly modest monthly donation.

And so began a special relationship that I had with a stranger a half a world away.

Her name was Lamneichong, and over the last decade, I have been blessed to watch her grow from a young girl to a high school graduate. She had been abandoned by her mother, shortly after her father died, but found her way to Angels Place when she was nine years old. What a joy it was to watch her flourish over the next 11 years.

We shared letters and pictures, as well as stories about important life events. Together, we celebrated her baptism and achievements in school. She had aspirations to be a clothing designer, and she showcased that talent through the beautiful sketches and drawings she sent in the mail.

For a while, I worried about whether someone like me – someone who had hardly wanted for anything as a child – could easily relate to someone like Lamneichong, whose life had been littered with hardship. Those concerns quickly faded away, though, as we found commonality in our faith. She’d always end her letters with a note about how she was praying for me. I found it humbling that someone who could have been so hardened by life’s circumstances could demonstrate such a mature faith.

Lamneichong recently completed her schooling and graduated from Angels Place. I’ll miss our correspondence, but I also know that she is destined for great things. As for me, I now get to know another Angel, this one named Chinthiannem, a nine year old I began sponsoring this summer. And what a blessing it will be to spend the next decade bonding with another one of God’s children who, without the work of James Connection, I would otherwise never have gotten to know.