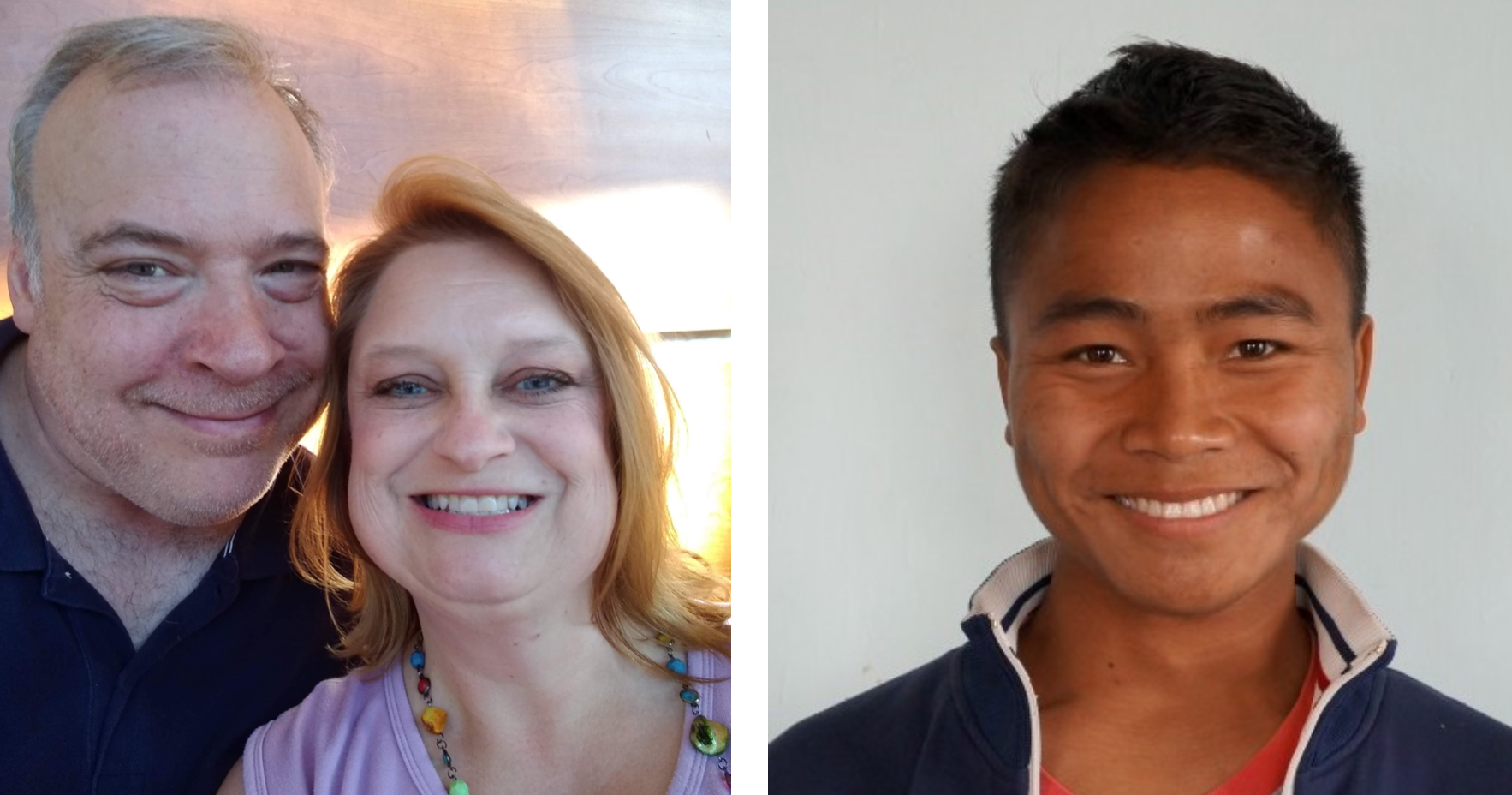 Second grade teacher Ann Smith and systems analyst Todd Smith have made room in their family for many children at Angels' Place, but the first one - Chinsanglem - holds that special place.

Most of our sponsors choose to pay monthly by credit card and, inevitably, that credit card expires giving me the opportunity to contact that sponsor. Often that contact results in gratifying testimony. Such was the case recently when I talked to Ann Smith of Scott Depot, West Virginia.

Ann and husband Todd have been sponsors since 2008 when they learned about Angels’ Place from a presentation at Pine Grove Church of Christ. They have sponsored four boys through the years and graciously welcome a new child each time we ask.

When I asked Ann if we could count on their ongoing support of the children at Angels’ Place she responded, “We absolutely will continue to support the wonderful work you do. I’m in frequent contact with our first child, now a man, through Facebook. He loves that he is the first person to tell me Happy Mother’s Day due to the time difference.” He also provides practical advice: “When I was stung by a hornet, he was the first to offer an Indian homeopathic pain alleviation and it worked.”

Chinsanglem was ten years old when he came to Angels’ Place in 2006. He studied hard and qualified to attend Rayburn College for grades 11 and 12. Because he got a late start at school, he was 21 when he finished grade 12. He left Angels’ Place in 2017 to study at the Imphal School of Preaching and then to study hospitality at Imphal University. Upon his graduation, he found a job in retail sales. He supported himself and helped his siblings as well.

“When the pandemic hit, we saw how bad it was in India. I had to ask – he wouldn’t volunteer – but he lost his job in retail when everything closed,” said Ann. “I asked him if he was okay for food and money. He assured me that he was. He had enough beans and rice for a week and one week’s salary saved.” When the Smiths offered to send him money “he adamantly refused, saying we had given him enough when he was at the home as a child, that he was an adult who could figure it out, and …. he had plenty of beans and rice.”

Eventually and at their insistence, Chinsanglem accepted help from the Smiths until “he told us he had gotten a job and didn’t need it. I was humbled that he waved off the money as soon as he had a job.”

“He’s working again in retail, I believe. I’m not sure how their system works, but I do know that the work you do at Angels’ Place gave him far more opportunities for his future than he ever would have had. We are thrilled to be a part of this work!” says Ann.

James Connection committee member Jim Fields noted, “As I listen to Ann’s story, I am obviously struck by her love for Chinsanglem and by his desire to be self-supporting.  But I am also struck by something else! Angels’ Place does so much more for the children than provide food and a place to sleep; they promote Christian values like honesty, hard work and integrity.  Chinsanglem is certainly a shining example of that!”

Many sponsors tell us they wish they could maintain relationships with their sponsored child after he or she leaves Angels’ Place. With improved access to social media around the world staying in touch becomes a real possibility now. Although the James Connection cannot facilitate that ongoing communication, sponsors are free to invite it themselves. Simply include your social media information in the letters to your child and he or she can reach out to you when they are able to if they so desire.

Says Ann, “I won't forget the first time we used FB Messenger to video chat.  He and I both cried buckets.  He is on my FB background with my son and grandsons.  He is a part of our family and always will be.”

REMINDER: Letters are due postmarked by August 1. Please write to your child today!

After all of the challenges brought on by the pandemic, Angels’ Place is filled once again with learning and activities and the sound of children’s laughter!

Last year we launched a program called “Building Digital Natives.” Its name is curious, we know, but it describes an effort to make all interested children “native speakers” of computer language. This initiative is, by far, the most popular of all vocational offerings! Early in 2022, the vocational coordinator of Angels’ Place, Ms. Sangi, formed a group of students to participate in the pilot program. Resources limited the number of students, so Ms. Sangi used a lottery system in order to select the first 40 students. Mr. Siam and Mr. Lian lead the classes, which began with ten contact hours. The goal is to provide computer training to support life and work skills that can help the children after they leave Angels’ Place.

Thanks to the success of the pilot program and the award of two significant grants, we have since purchased 15 additional computers and invested in space modifications to best accommodate the Building Digital Natives program and the increasing number of children who want to learn computer skills. We expect to offer the program throughout the coming years in addition to our other vocational programs.

The second most successful vocational offering is the Tailoring Class. Many girls have taken to designing and constructing clothing for themselves and others. Their teacher is impressed with the skills and talent of several girls! She is confident that there are jobs for them in Churachandpur dress shops when they are finished with school.

In early June, representatives of the doTerra company visited Angels’ Place to observe the lemongrass production in the fields and to explore other ways to expand our partnership. doTerra is an American essential oils company that does business throughout the world. It has a unique mission of partnering with the communities where they buy essential oils. They are the major buyer of all the lemongrass oil that the James Connection produces.

Under discussion is the new possibility of growing ginger for doTerra’s use. doTerra also wants to improve the medical services in the town of Churachandpur by donating much-needed diagnositc equipment such as MRI’s and training technicians to operate it. During their visit, the Angels’ Place children performed traditional songs and dances to entertain their guests. Our partnership with doTerra continues to be a valuable opportunity for generating earned revenue to support the orphanage and an increasingly valuable opportunity for the surrounding community.

Students Move Up and Move On 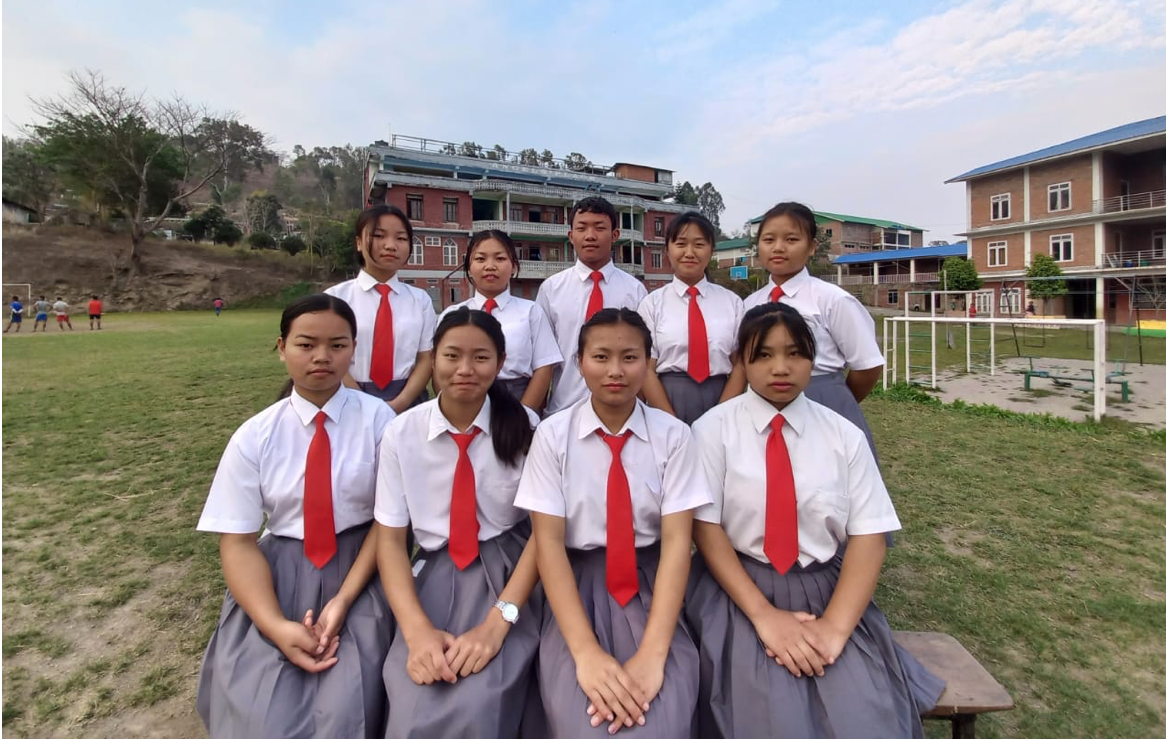 Congratulations are due at Angels’ Place! Nine students who passed the state exam following grade 10 have matriculated into Level 11 of the local Rayburn College High School. Another ten students have completed Level 12 at Rayburn and are now departing Angels’ Place. We are proud of their outstanding achievement. Because of the mission of Angels’ Place and your support, these children can look forward to a much more promising future.

The generosity of James Connection supporters has made possible all of these activities: the Building Digital Natives program, the vocational training in sewing, the cultivation of lemongrass, and the continuing education of the children. We thank you for your support!

To learn more about other ways you can support the James Connection and the work we do, visit our Ways to Help page.